Receiving mailings from finance companies these days could be quite painful if I didn't have a robust sense of humour. Just yesterday I got an update on an endowment policy, with the now familiar warning of a 'high risk of under-performing'. Yes, indeed. If it manages to grow by 4% per year it will end up worth less than two thirds of what I was told it would make when I signed up for it in 1986. Twenty-five years seemed a long way off back then; now it's next April, and my investment needs to grow by over 50% to hit its target. Or I need to snuff it before then.

Today I got an update on a pension scheme from a company I left in 1989. It informs me as to the size of my pension pot, notes that once again I haven't added anything to it in the last 12 months, and cheerfully tells me that when I retire I can expect an income from it of a staggering £1200 a year. Just to add insult to injury, that income will be taxable.

However, that's not the funny part. That goes to the three identical enclosures: 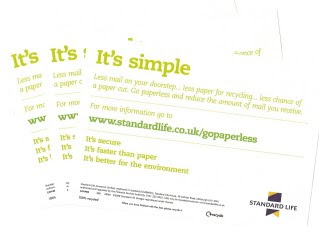 It's these little touches that really show how much you care.
Posted by Charles Anderson at 12:49