Another Useless Message from Microsoft

This is what just came up when I tried to run a .mov file using Microsoft's Movie Maker:

Why not? Your software must know. Some test was done by Movie Maker and the wrong answer came up, so it bottled out and put this stupid message up instead of telling me what's wrong.

Clicking on the first link took me to a web page that wasn't really very useful. However, it was a beacon of illumination compared to the second link, which took me here:

I gave up and installed QuickTime.

Back in the nineties (before Steve Jobs's return), Scott Adams wrote that Microsoft had turned Apple into Microsoft's R&D division. I sometimes wonder if nowadays Microsoft hasn't morphed into Apple's Marketing division.

Posted by Charles Anderson at 16:06 No comments:

Spotify for Android exited after logging In

Although I installed Spotify for Android shortly after I bought my Nexus S, I rarely used it; when I have time to listen to something I tend to choose podcasts or audio books. So I couldn't say for sure when the Spotify app stopped working.

The symptoms were that I would start up the app, log in, and a few seconds later it would just quit. No explanation. If I started the app up offline (i.e., no wi-fi or 3G network available), there was no problem, other than not having any music to play. Then as soon as I went online, the Spotify app would crash.

I couldn't find anything about on it on the web, apart from one person who'd 'fixed' it by deleting all their playlists. He suggested it might be due to an awkward character in a song title. This fitted in with my experience, in that the program seemed to crash while synchronising data. Unlike him though, I wasn't prepared to chuck out all my carefully assembled playlists.

But it kept bugging me, and the more I thought about it, the less plausible this seemed. If it was really down to having foreign characters in a title, surely thousands of people would have been hit with this, and Spotify would have quickly fixed it? So maybe it was something else in my playlists. Looking at them on my PC, I noticed that several tracks had a sort of lock icon next to them. In each case the track could no longer be found via a general search, though an alternative version of the track could. I'm guessing that the original track is no longer available, but Spotify is substituting the replacement. So I went through and manually replaced all those tracks. Alas, it had no effect on the Spotify app.

All was not lost: while getting rid of the lock icons, I'd noticed a few 'musical note' icons. These indicate tracks which are local to your device. Could the Spotify app be falling over trying to synchronise music that was on my PC's hard drive? I took all the local music out of my playlists, and my Starred items, and a couple that were in my waiting to play list. And finally my Spotify app managed to start up properly.

So that's the trick: don't have any local files anywhere in your lists. I can log in just fine now. In fact, it's even better than that: I've just noticed I can't seem to log out.

Supplemental: My Android app is bombing out again, and there are no longer any local files in my playlist. So I'm back to square one, or maybe square two, as at least I've established that the problem's something to do with the playlists. I am not giving up on this though: watch this space.

Supplemental 2: I think I've really fixed it this time.

Just read this at LifeHacker, and was completely astonished that something so useful isn't better known. (The original story seems to be here.)

It turns out that you can automatically jump forwards and backwards in a YouTube video by pressing the number keys, 1 to 9. It only works when the video is paused or just about to start, not when it's playing. Pressing 4, say, will take you to the 40% mark in the video. And it's really quick.

On my PC it only works for the normal number keys, not the ones on the numeric keypad. However, in verifying that just now, I've also noticed that you can also use the arrow keys and Home/End to navigate through a video.

Now if there was only a shortcut to Pause a video.

Posted by Charles Anderson at 12:25 No comments:

My son asked me to explain port forwarding to him last night: he's trying to set up a Minecraft server on his laptop so that his friends can play on it, but he needed to give them his IP address, and this keeps changing.

As I struggled to explain, I realised that I didn't fully understand port forwarding myself. I could see exactly what his problem was, but even though I've been using the internet for 16 years, it had never occurred to me to really wonder how external computers can communicate with a computer that's inside a local network.

We've cracked the port forwarding problem now, after he found out how to do it on YouTube, and then talked me through configuring our router to forward requests to port 25565 to his server. It turns out that I did know what was going on after all: I'd just never got all the pieces properly together in my head before. Going through this exercise forced me to.

My son is still only eleven, and already I'm having to up my game to keep up with him.

One thing I don't understand: how did our router have an up to date list of possible games built into it? Is this coming from our ISP? Nearly all the games are ones we've never used, so it's unlikely it found out from our own computers.

Posted by Charles Anderson at 15:28 No comments:

There's been major excitement (albeit very localised excitement) in this house following the news that Nexus S phones would be automatically upgraded to Android 4. However, as the days turned into weeks I began to wonder if I should ignore my phone provider and do the install myself.

I almost went ahead with it over the Xmas holiday, but news reports about Google suspending the process because of unspecified problems made me back off. Yesterday I cracked.

What's Android 4 like? Well, the Look & Feel of the UI has improved, and it looks like I no longer need a couple of apps because Android now does the job for me. The default Camera app is much better, and there are several other enhancements. Nothing earth-shattering, but perhaps I haven't yet found all the changes. (I only a couple of hours ago found that I can dismiss individual notifications by swiping over them from right to left.)

Now for the downside: I have encountered three problems since I upgraded.

Most worryingly, last night for the first time ever the screen stopped responding to touch. I tried to power it off, but of course couldn't confirm the action. Then, when I pressed the power button to turn off the display, it was still faintly visible. After a few cycles the phone started responding again, so I quickly powered it off fully before it changed its mind. It hasn't done it again since I switched it back on.

Secondly, I've had notifications that Google+ has stopped. Google+ seems to be built-in, because you can't uninstall it. I disabled it instead, in case it's behind the first problem.

Finally, I've twice been told today that my phone provider is unavailable. To be fair this does happen, but not often, so I mention it here for the sake of completeness.

All in all, I do like the new look, but it may take a few days before my confidence in the phone's reliability is fully restored.

Posted by Charles Anderson at 15:13 No comments:

This map hung on my mother's wall for as long as I can remember. It was drawn by her father, the landscape architect Georg Pniower, and I always assumed it was a map of gardens he'd designed, as indicated by the 'P' shaped spade handles. 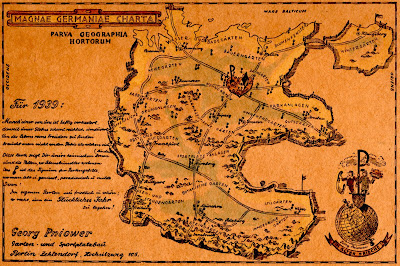 Looking at it again yesterday I noticed for the first time that the writing on the left is in verse. Now I wonder if it was some sort of puzzle ('for 1939'). My German isn't good enough for me to be able to transcribe the writing accurately without considerable effort, and even then I've noticed that Google Translate can be very poor when given poetry to work on. I'm posting it here in the hope that someone can one day shed light on it.

In 1939 my grandfather was no longer officially designing parks and gardens, the Nazi regime having long since decided that his Jewish ancestry made him unsuitable for this role. After the war though he became a Professor of Horticulture at Berlin University.

Posted by Charles Anderson at 14:12 5 comments: