My first online music subscription was with Napster, the legal version. I used it mostly at work, running it on my desktop PC. It worked reasonably well for a while, though tracks that were available one week did have a tendency to go missing the following week (including the only one that I actually paid for). However, napster.exe just got bigger and bloatier and slower, so I looked for an alternative.

Spotify was brilliant when I started on it, so much nicer than Napster. It always remained fast, but it annoyed me by slowly removing features I liked, and the UI design became increasingly difficult to use for someone whose eyesight has seen better days. When it changed to dark grey on a black background, I gave up and swapped to Google Play Music.

Now Google Play Music is being phased out. Google encourages us users to migrate to YouTube Music instead, and this I recently did. The rest of this article describes the experience.

First thing to say is that the transition was almost completely painless. The process took just a few minutes, and when I opened YouTube Music I could find all the tracks that I'd previously uploaded to Google Play Music. I could also find most of the music that I'd listened to but which wasn't uploaded; i.e., native tracks. Of course, I haven't checked that all the music came across, but this seems to be the state of things. Annoyingly, one thing that didn't come across was an album that I'd actually bought in Google Play Music. It's not available on YouTube, so that would have been that. However, I got round this bizarre situation by downloading the album from Google Play Music, then uploading it into YouTube.

How do the two apps compare? Well, the UI looks more modern in YouTube Music, and in terms of music playback quality they seem comparable. YouTube Music though is lacking several Google Play Music features that I miss, and doesn't seem to have added any that I've noticed.

These are my main complaints:

This is far and away the most annoying missing feature in YouTube Music. Basically if you want to remove a 20 track album from a playlist, you have to remove each track in turn. There's no way you can select all 20 and then remove them in a single operation. It's such a simple thing to implement, and such a major pain to not have, that I am really at a loss to understand what Google were thinking about. I've got 42 tracks to remove from one playlist, and it would probably be quicker to delete the playlist entirely and then remake it.

In Google Play Music each track shows how many times you've played it. I listen to a lot of new music, and I tend to add albums that have come to my attention to a playlist called Reviewing. It really helps that when I go into this list I can see which tracks I've actually listened to. Now in YouTube Music this simple feature is gone. I suppose I'm meant to keep a note somewhere; perhaps a Google Doc? 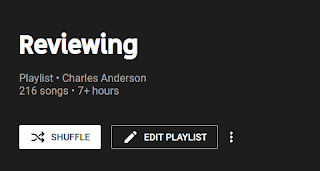 It's a small thing, but why can't YouTube Music tell me the exact length of a playlist? Adding up numbers, even 216 of them, is trivially simple. Google Play Music does it, so why not YouTube Music?

I have some playlists that I've downloaded onto my phone. With Google Play Music, the app was constantly synchronising this, so if I added more music to a playlist, it would rapidly be downloaded to my phone. For reasons unknown (unfortunately a familiar refrain now) YouTube Music doesn't seem to bother with this. It can't even get it right the first time, as I've found some tracks in supposedly downloaded playlists that aren't available. And there's no obvious way for a user to fix this.

With the exception of the multi-selection, these are fairly small issues; however, they're all features that were available in Google Play Music, and as that and YouTube are both Google products, it's really, really hard to understand why this functionality isn't also provided by YouTube Music.

Moving to another music provider is a major hassle, but I think I will now start looking around.

Posted by Charles Anderson at 10:56